We finally finished the lower cabinets on one side of the kitchen. The only thing missing is a handle, but of course Ikea stopped manufacturing the one that we have on all other drawers. I’ve looked online but with no luck. We have to come up with something for that, so ignore the missing handle. 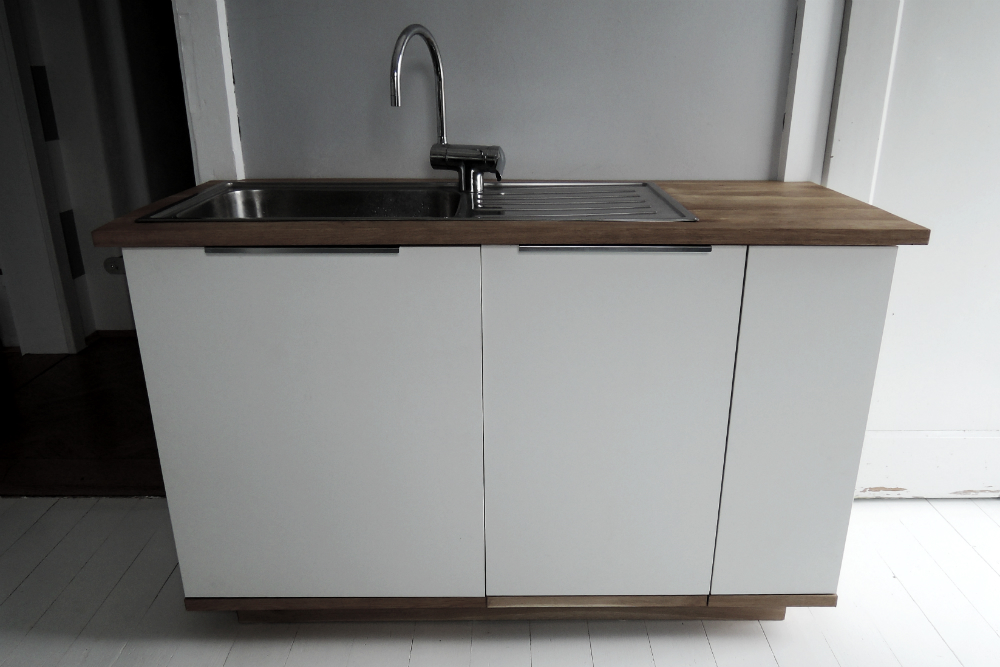 So last time we installed the washing machine, made a new counter, cut the original cabinet and adjusted the plinth. All there was left to do was to build a drawer for the narrow cabinet.

Evgen cut a piece of plywood to 11 rectangles according to the design we made. We wanted 3 shelves, the bottom one the deepest and the top one the shallowest. On the bottom of the back piece he cut out a little rectangle piece on both sides for the sliding mechanism. First he drilled holes on the front and the back of the drawer. 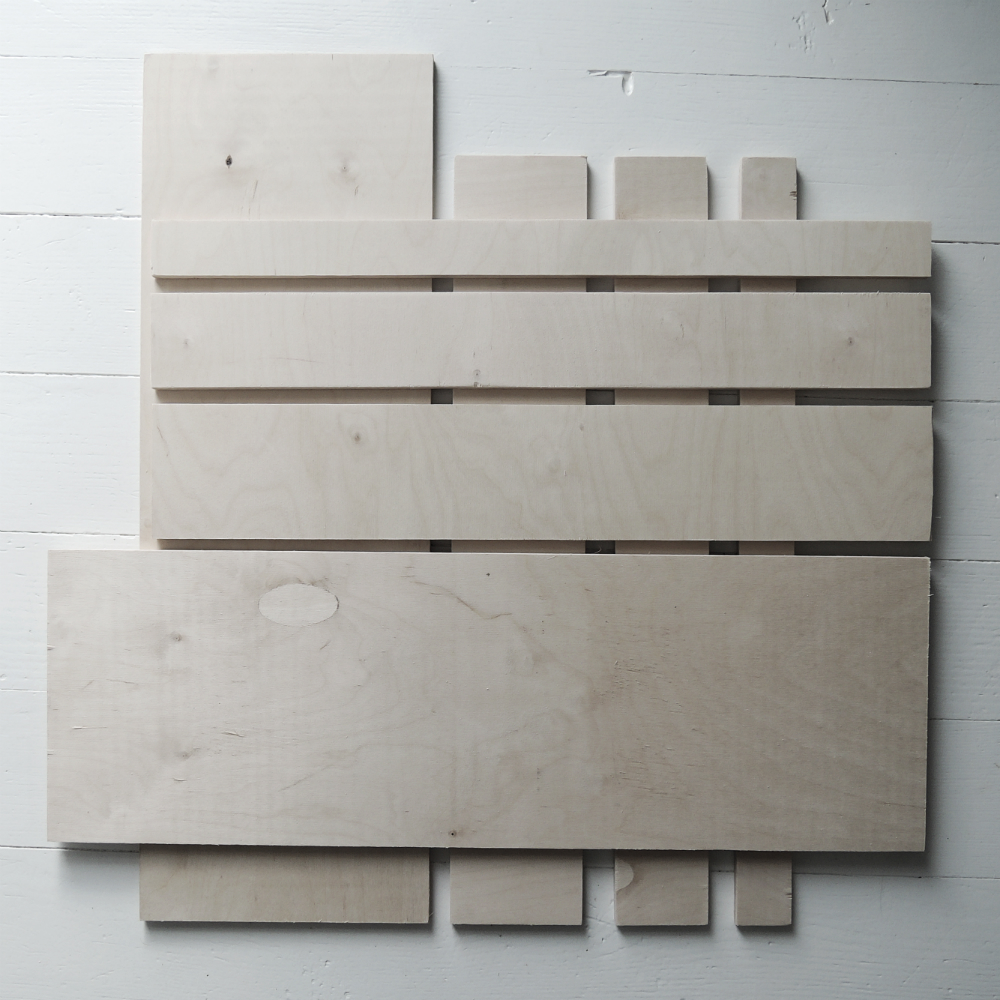 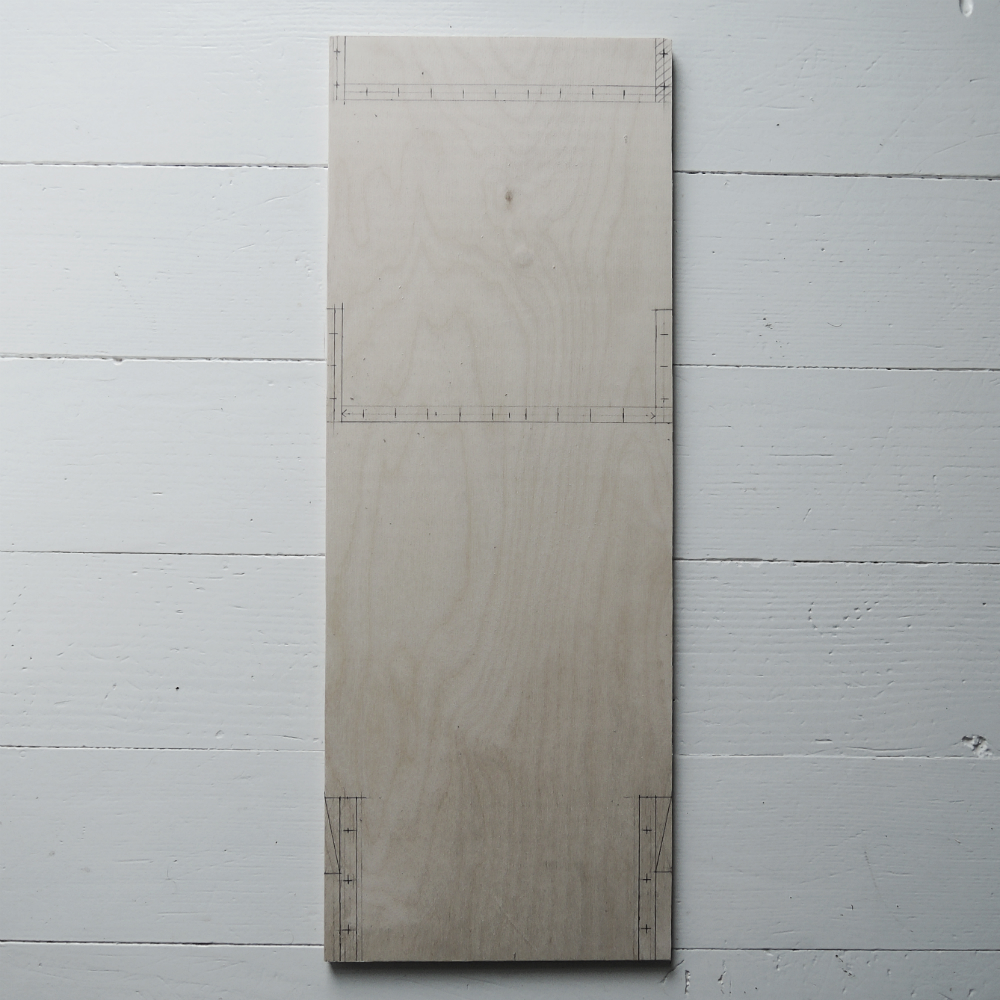 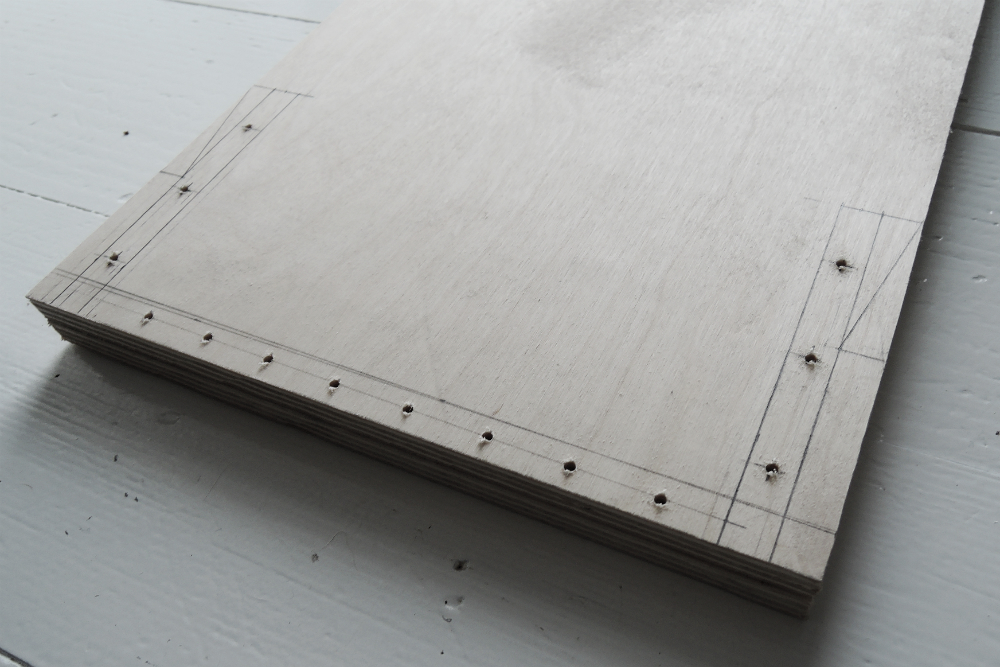 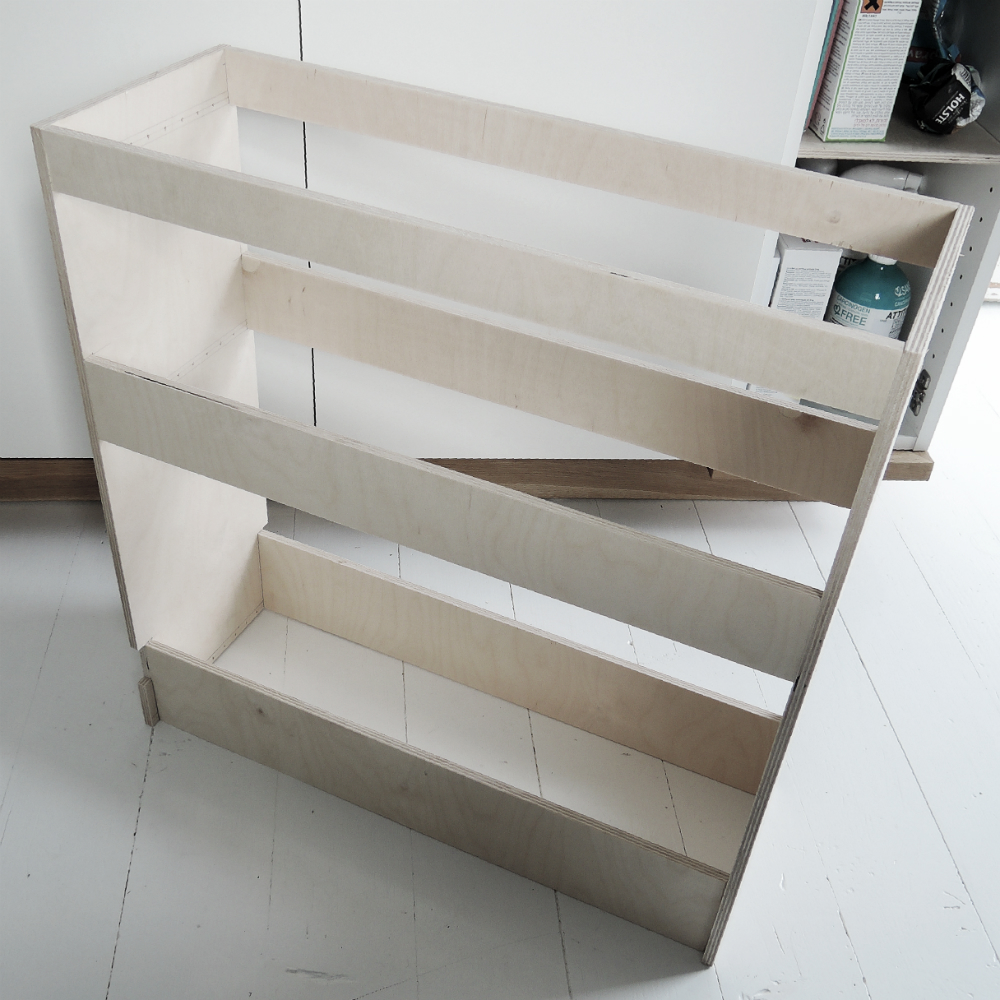 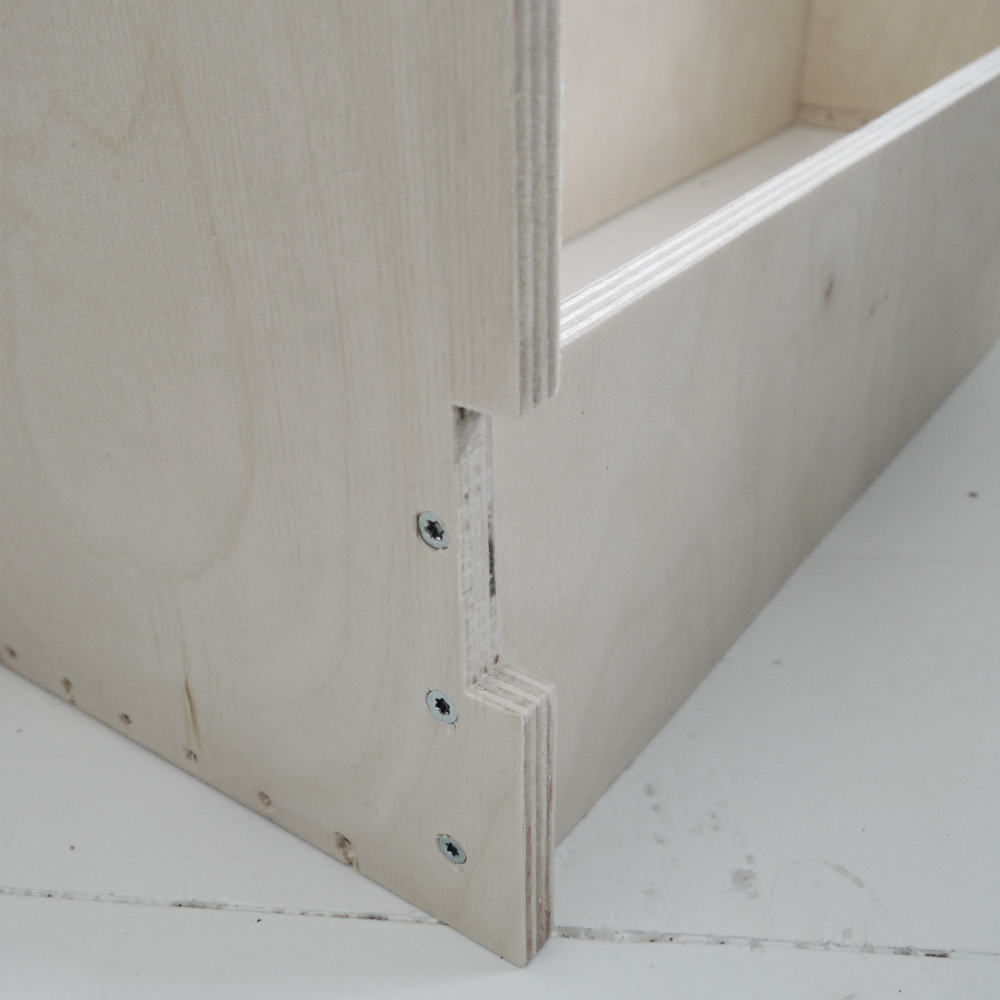 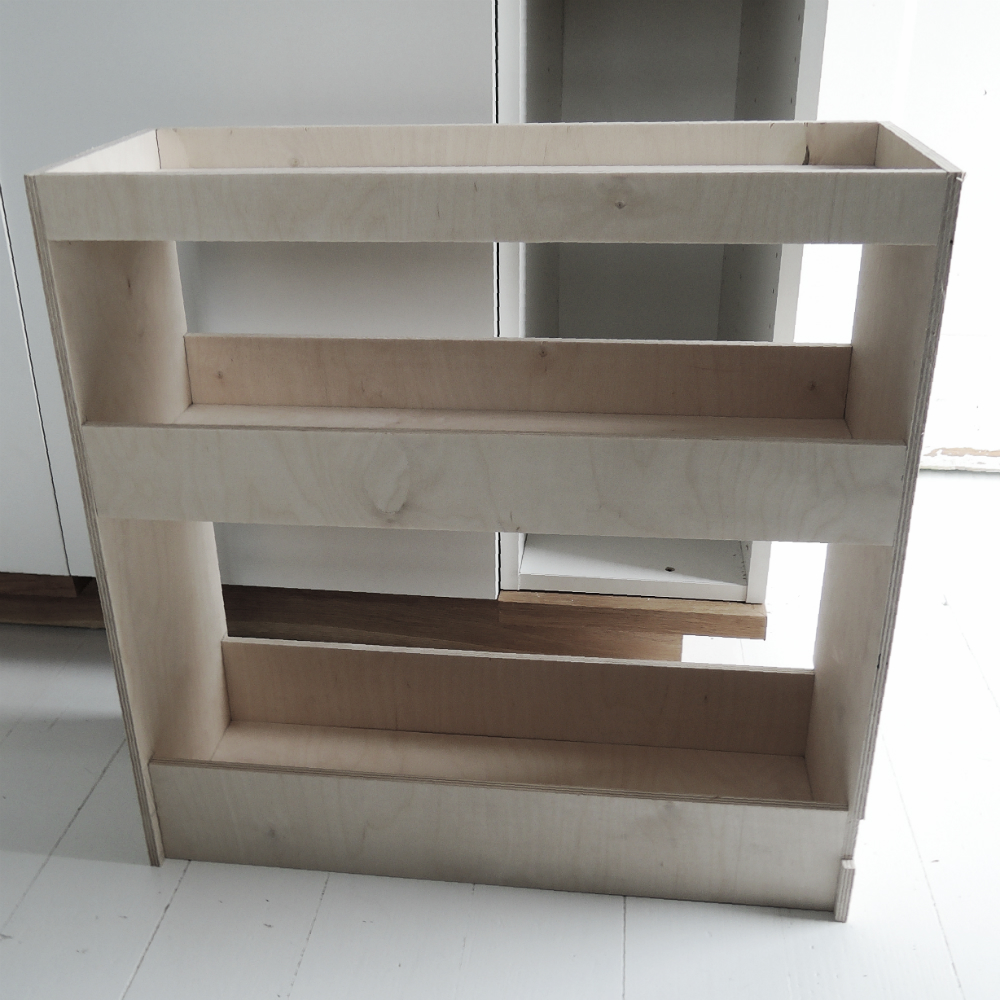 The bottom shelf is a little narrower than the other two, because of the sliding mechanism for the drawer. Since the cabinet is so narrow as it is, we wanted to use as much space as we could. That’s why we left the other two shelves wider than the bottom one.

When the insert of the drawer was done it was time for the sliding mechanism. It was first screwed on the inside of the cabinet and then, when it was stretched out, on the sides of the insert. 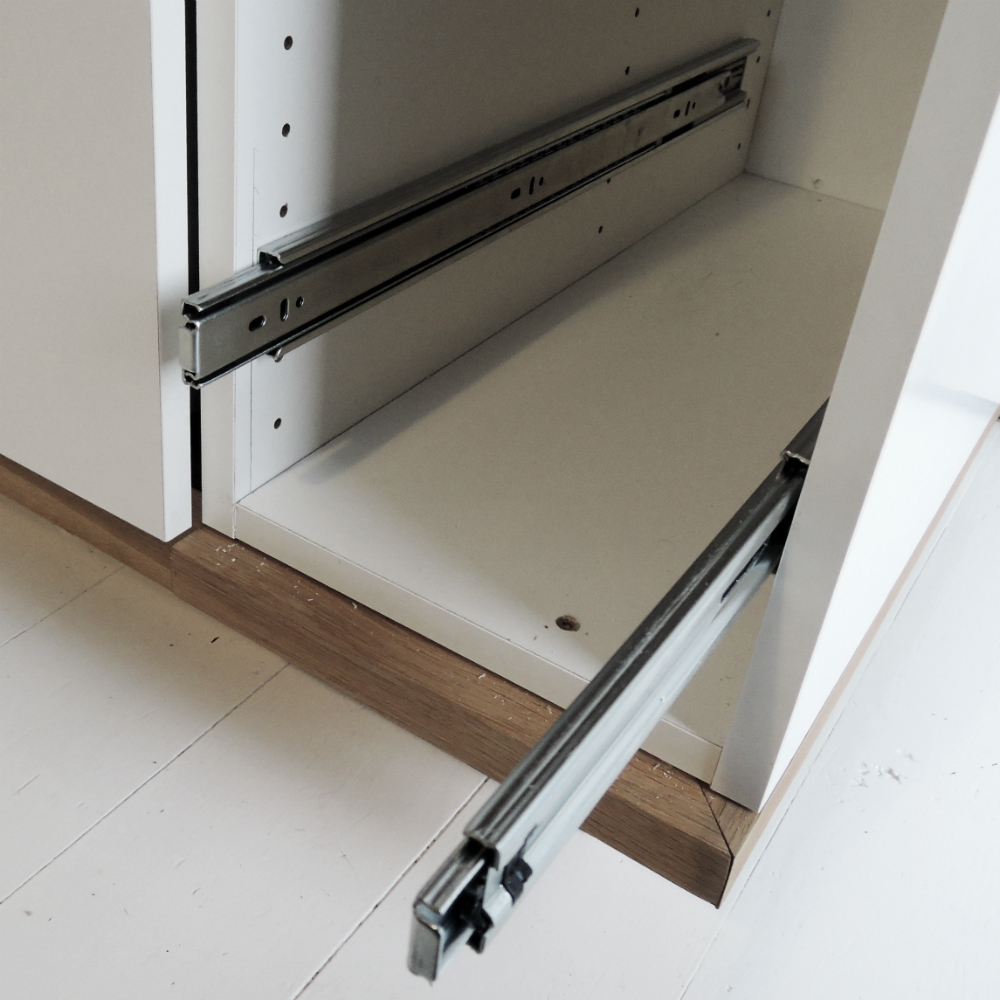 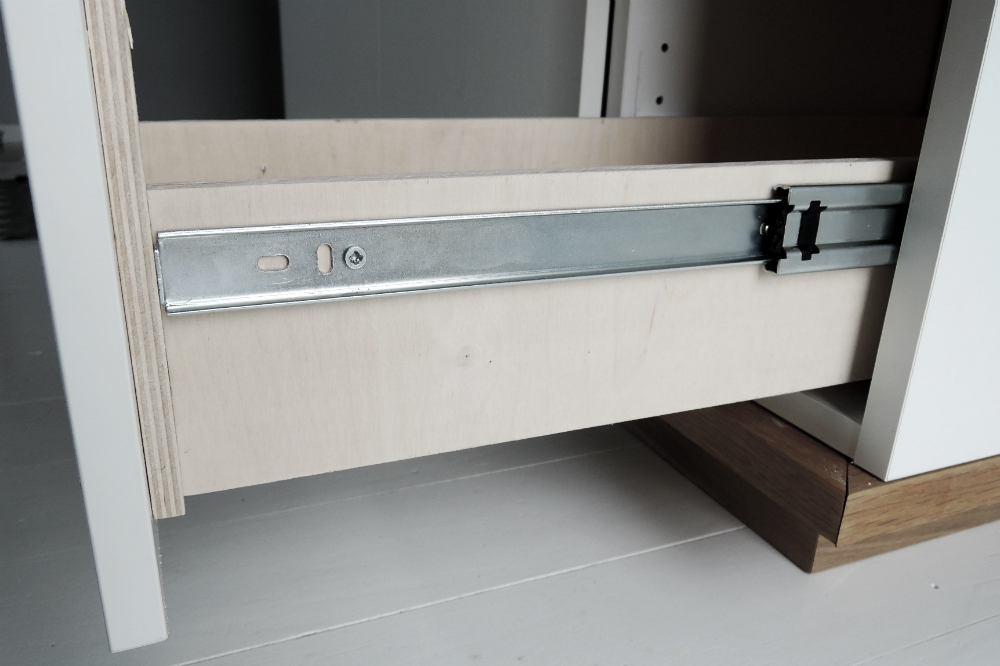 Now all there was left to do was to cut the original front of the cabinet to size. Since Ikea changed the whole kitchen system and stopped making this specific front, I could not just buy a new one. But I got lucky! I got the front in part of the Ikea’s store where people return back items or the items are damaged and you can get it cheaper. It was supposed to be a drawer and it was only 2 eur. Yaay! So Evgen applied a masking tape over the line where he would cut. The masking tape prevents the particle board to chip. After that, he applied on the side, where the particle board was raw, the ABS edging strip. With an iron he glued it on and secured it in place. Then he just cut of the remainder and sanded the edge. The drawer was done! 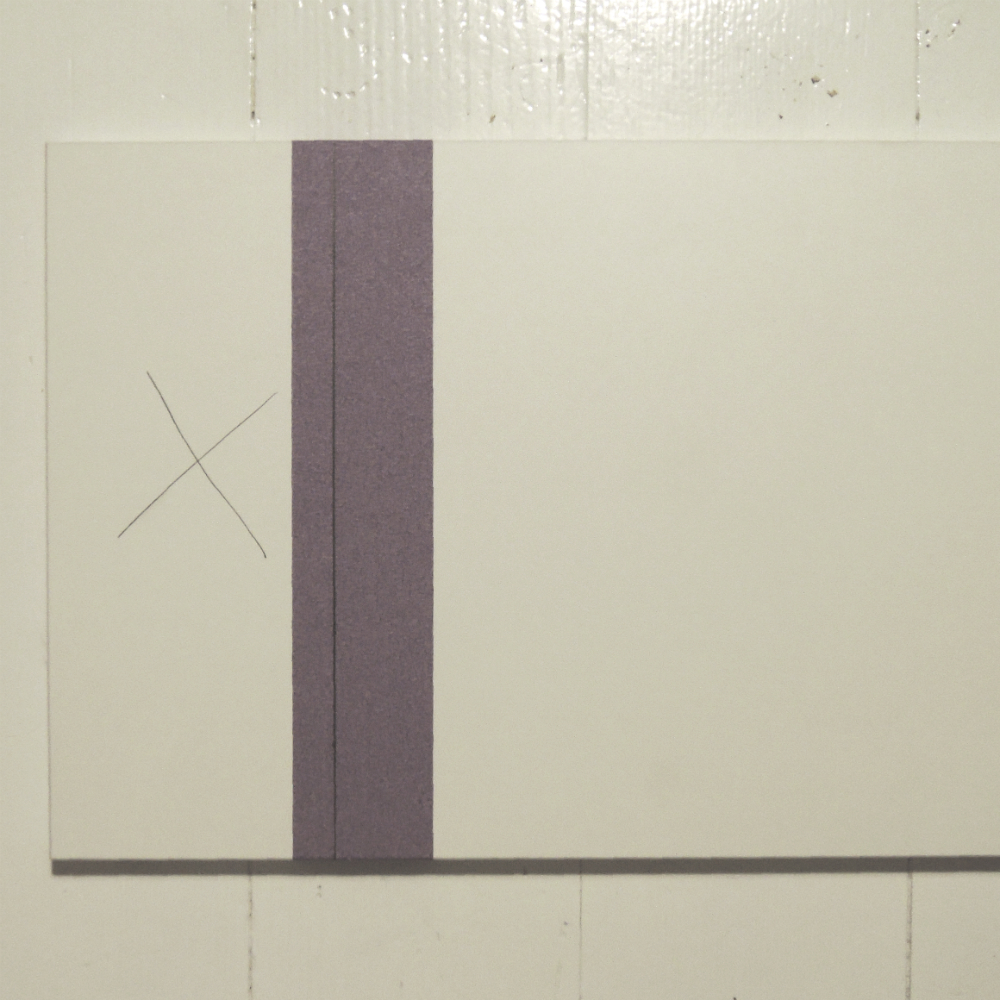 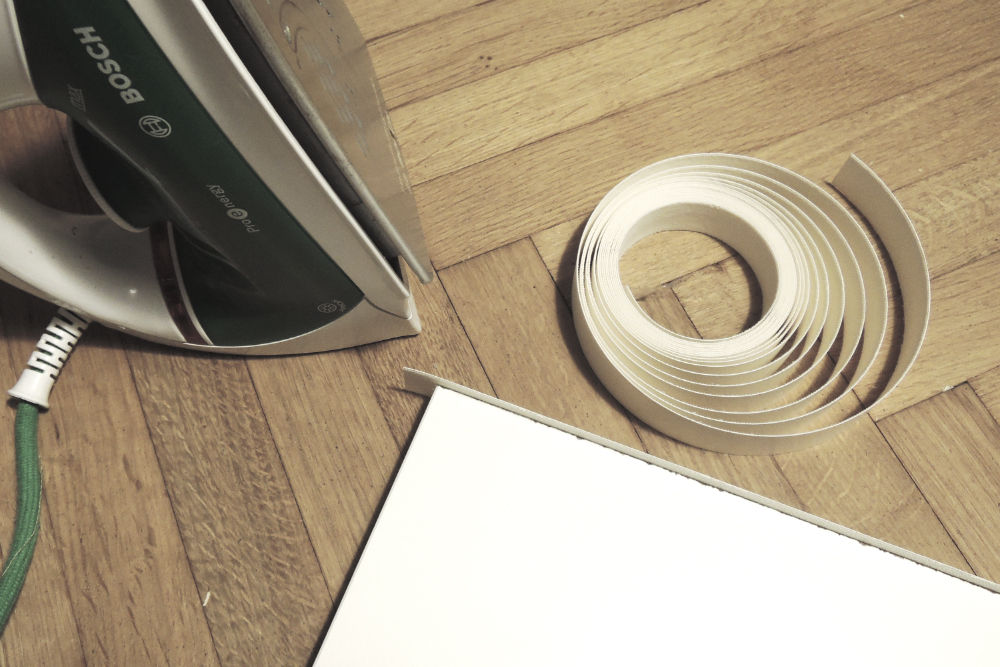 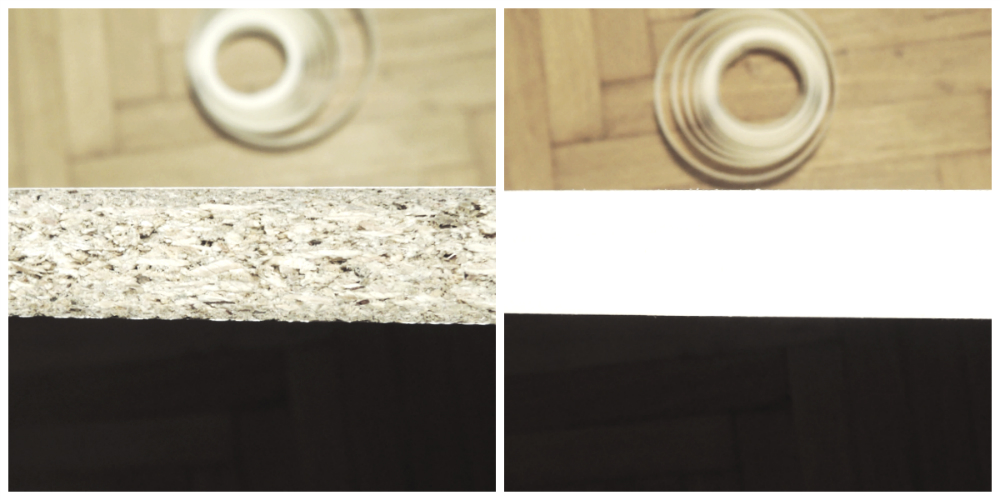 He repeated the process of applying the edging strip also on the washing machine front. There could not be the same kind of plinth that we have on all the other cabinets, because the door would not open. So to make it seem like there is the same plinth going all around the three cabinets, he just screwed on the bottom of the front a piece of oak that was the same width and thickness as the front. 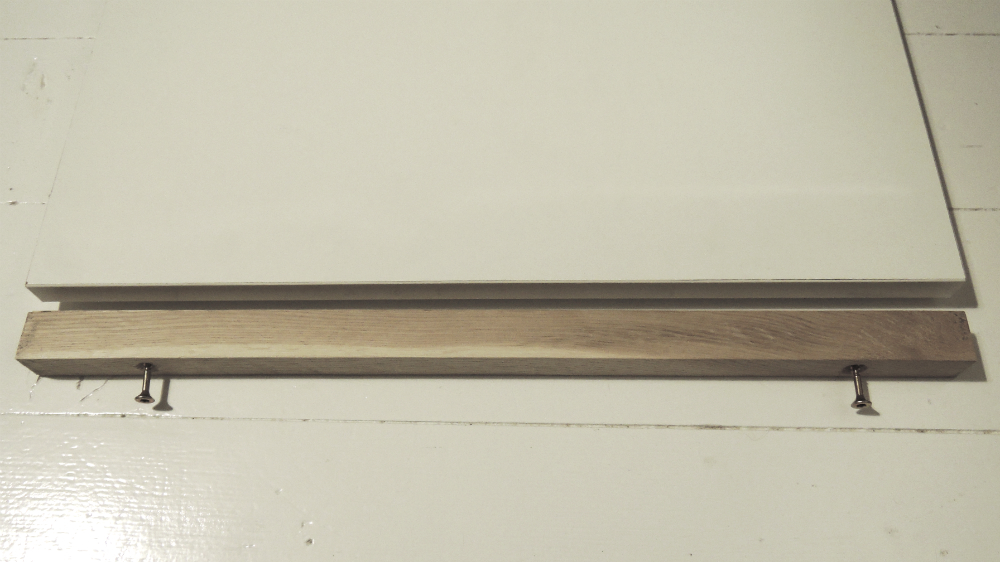 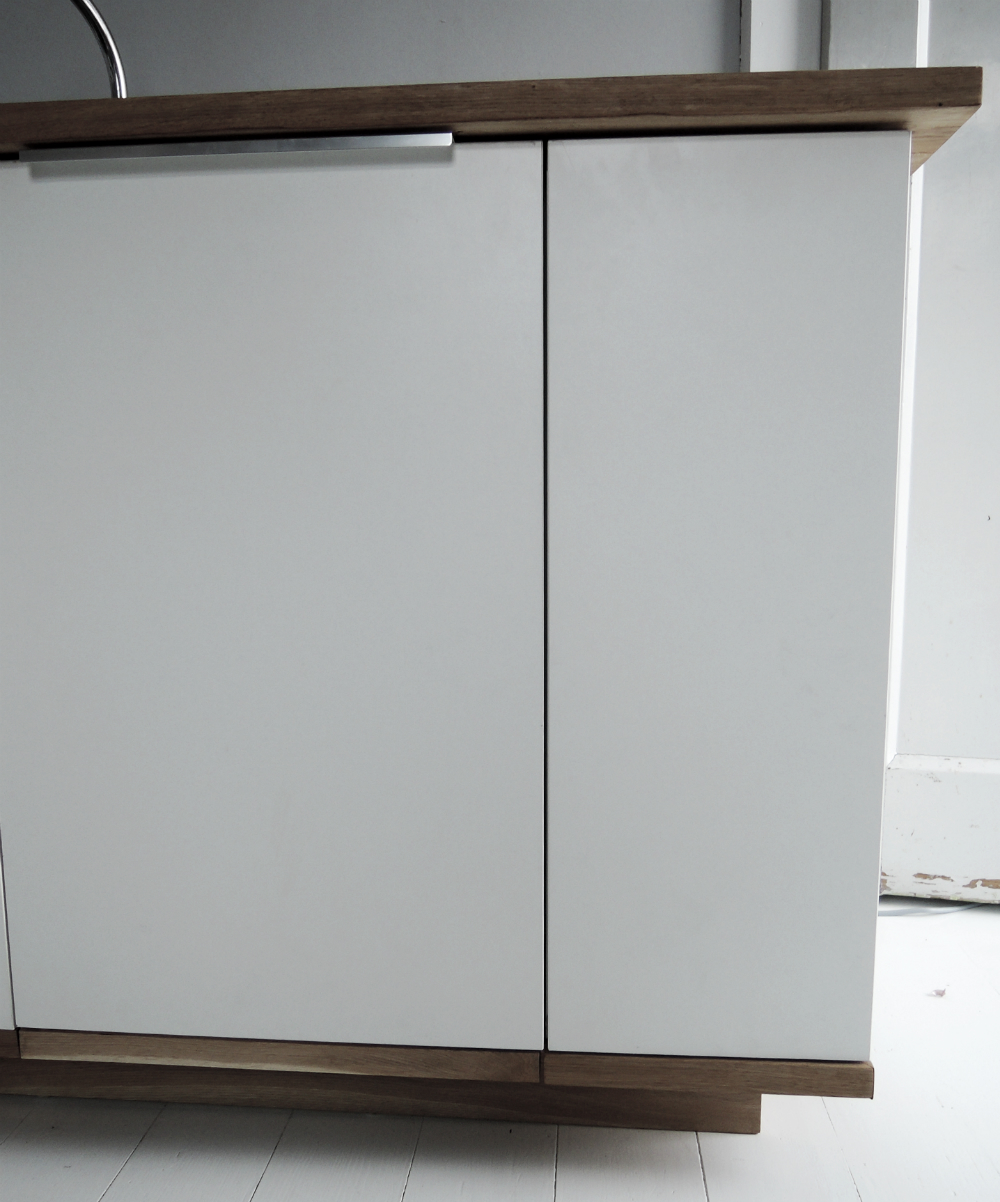 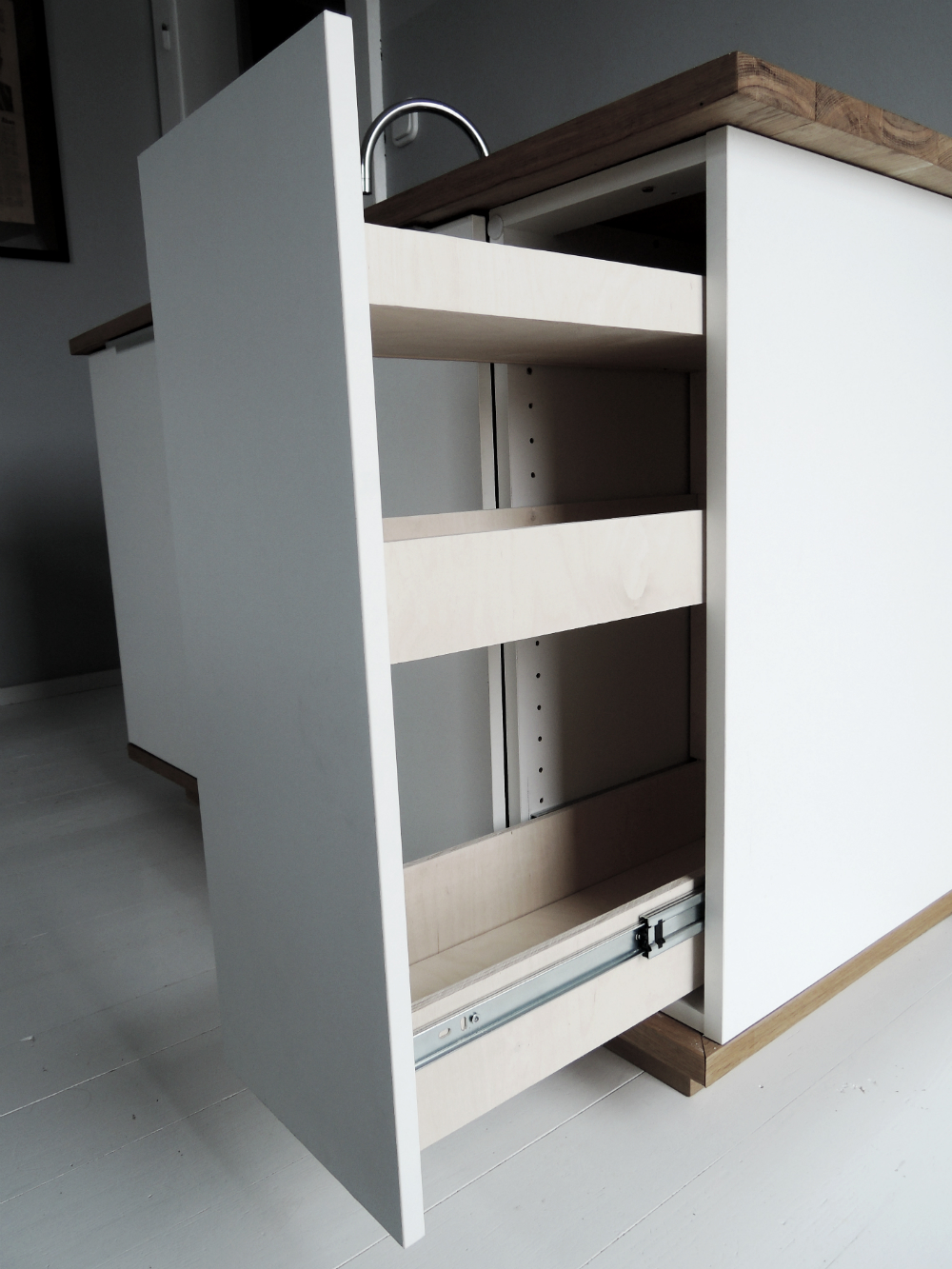 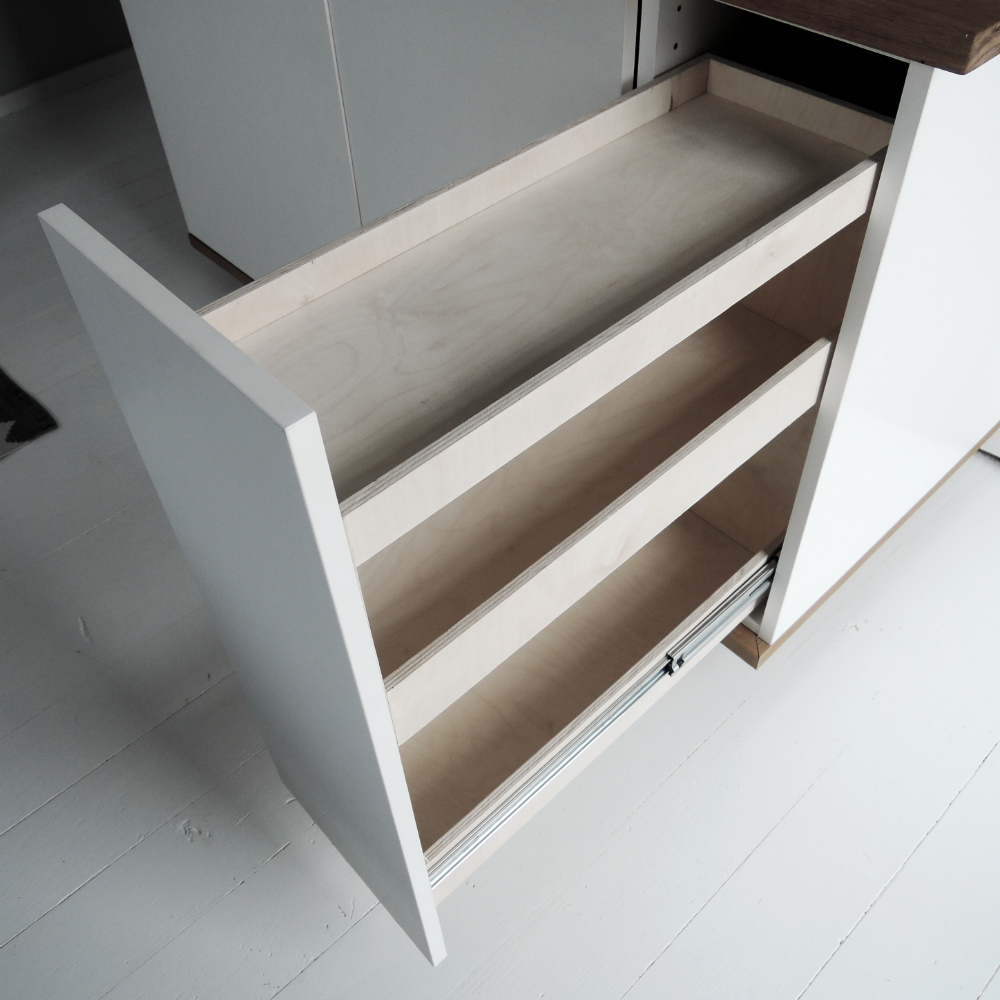 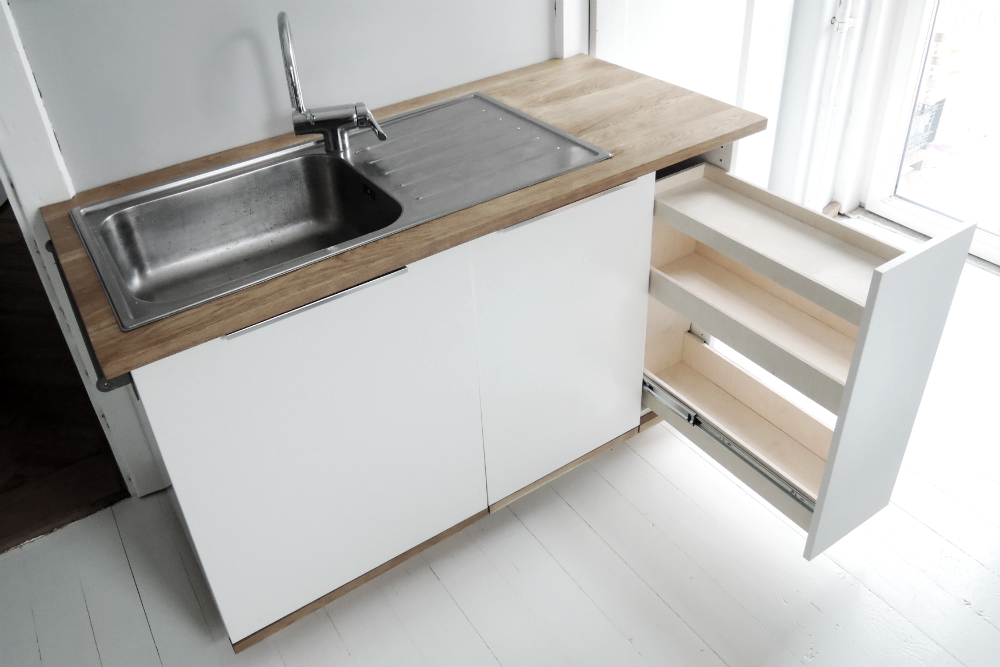 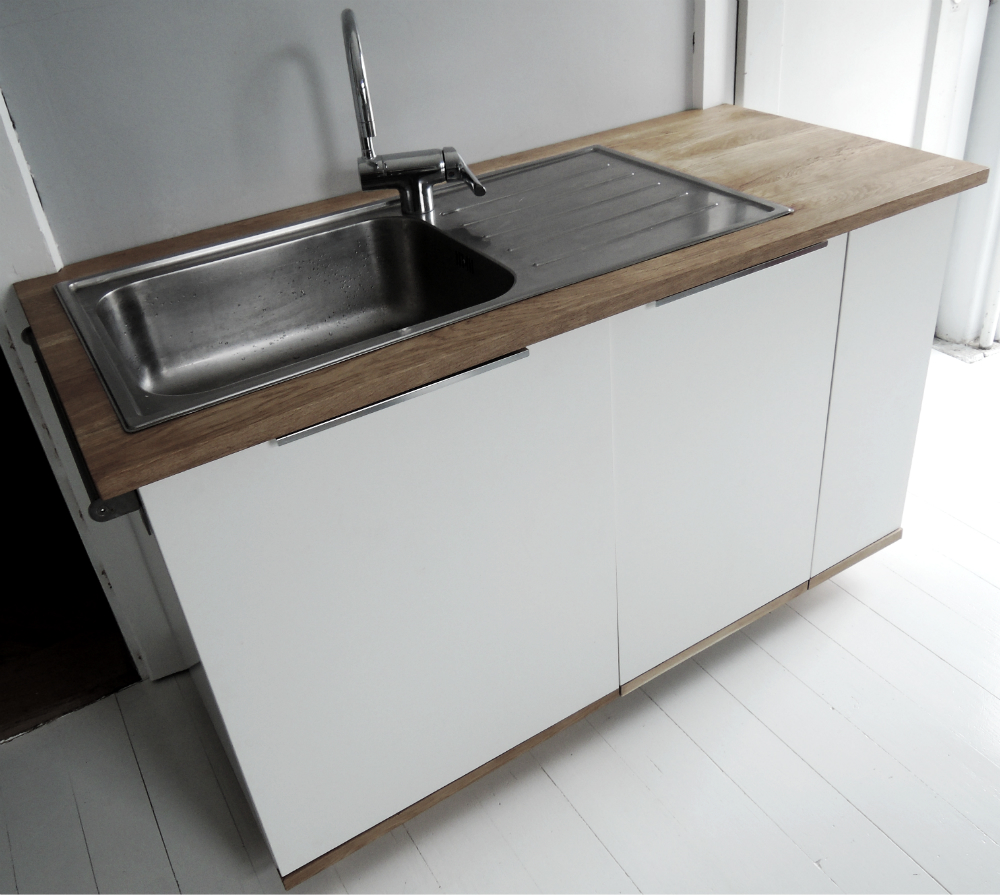